The front features a portrait of Edward, Prince of Wales, the first son of King George V and Queen Mary. Edward is shown wearing the khaki uniform of a colonel. The portrait was based on a photograph credited to the famous British photographer, Vandyke, and owned by the Canadian Department of External Affairs. Harry P.Dawson, British American Bank Note Company's master engraver, engraved the allegorical figure representing electric power that appears on the back of the note.

To help you to know the meaning of grades such as G, VG, F, VF, EF, AU, UNC, etc., you can jump to the grading section.

View the average prices of certified 1935 sold at auctions »

You can also view the list of values for special serial numbers and errors and varieties. 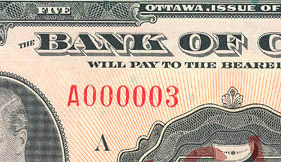 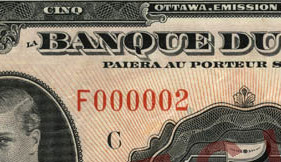