Printed by CBN, the $20 note features a portrait of 8-year-old Princess Elizabeth (granddaughter of King George V and later Queen Elizabeth II). The engraving for the note, completed by Edwin Gunn of ABN, was based on a Marcus Adams photograph of the princess. The image on the back, based on a painting by Alonzo Foringer, shows two allegorical figures representing toil.

To help you to know the meaning of grades such as G, VG, F, VF, EF, AU, UNC, etc., you can jump to the grading section.

View the average prices of certified 1935 sold at auctions »

You can also view the list of values for special serial numbers and errors and varieties. 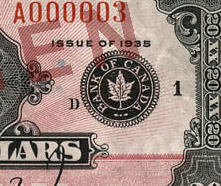 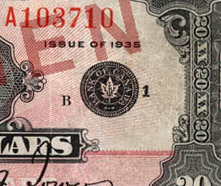