Top 10 most valuable Canadian coins sold at auction in 2020

Last year was historical due to the amount of high-end coins that sold at auctions. This year is historical for another reason: COVID-19. Because of the restrictions and limitations on social gatherings around the country, most auctions were online exclusively, without any attendance at physical shows. Nevertheless, the rising prices for precious metals attracted and animated the Canadian coins market. Here's the Top 10 most valuable Canadian coins sold at auction in 2020 so far.

Superb rainbow toning, we do not hesitate to say that this coin is the best 1948 dollar you will ever see and ranks #1 with the PCGS rankings tied with two others (03/20). Very rare in this superior quality! 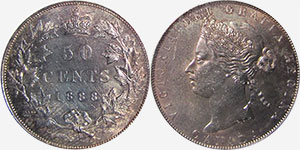 Sublime appeal with an overflow of bright luster with touch of golden rim tones. Top 3, with two graded 65. Largely brilliant with the lightest hint of toning and tremendous luster evenly distributed on both the obverse and reverse. Objectively, an important coin.

At the same auction and in the same collection as the previous coin on this list, this 25 cents 1875 H was described as:

Rare, key date for the series, with silvery-white satin tone over both sides. The devices retain a pleasing level of sharpness, and evidence of handling remains minor throughout, with light contact marks over the Queen's portrait, and scattered wisps in the fields.

This is the only one 25 cents 2000 P certified by PCGS with only 3 to 5 known according to Heritage Auctions. This coin was previously part of The Cook Collection and it sold on January 13 in New York. 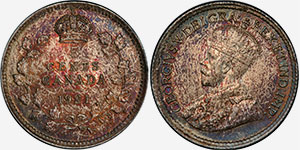 Considered The Prince of Canadian Coinage this coin was the highlight of the 2020 New Year's Auction Sale by The Canadian Numismatic Company. In 1921, a legislation was passed to remove silver 5-cent coins and replace them with 21mm (instead 15.5mm) 100% nickel ones. At that time, the Mint melted more than 3 million of silver five cents coins which most of them were from 1921. Only 400 silver 5-cents coins are believed to have survived. 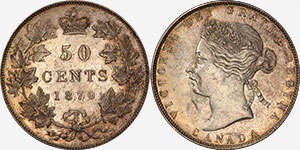 This 1870 half dollar sold during the sale of The Walczak Collection of Canadian Coins on June 28, 2020 by Heritage Auctions and was described as:

This example, a prominent Mint State specimen, features desirable color, velveteen luster, and designs that have received an exacting strike. Presently, the PCGS census reports that only three coins of this variety have been certified at the Mint State level. In addition to this specimen, we sold an MS64+, which was part of the Canadiana Collection from our 2016 April CICF sale that realized an all-in price of $70,500, and back in 2010, we offered an MS64 example that brought $86,250.

Pictures by Heritage Auctions, PCGS and The Canadian Numismatic Company.