Top 10 most valuable Canadian coins sold at auction in 2021

The sale of one of the 1936 Dot cent marked the end of this substantial year in Canadian numismatic now that the shows are starting to take place again in person. Collectors also had the chance to acquire some of the highest known 25 cents coins with the Marlborough Collection of George V Quarters sale. Here's the Top 10 most valuable Canadian coins sold at auction in 2021 so far. 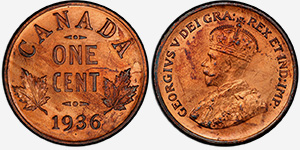 At one point in time, John Jay Pittman held all of the only 3 known examples of the 1-cent 1936 Dot coin from 1961 to 1996. For 35 years, this coin wasn't available to any collectors. The highest graded one, SP-65, was in the hand of George Cook from 2010 to 2019. It was downgraded from SP-66 to SP-65 because dipped to remove a fine layer of lacquer. It also sold at the ANA World's Fair of Money in Chicago during an auction held by Heritage Auctions. 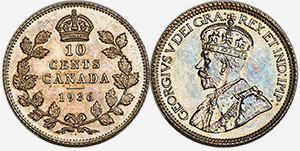 Only three 1936 Dot 10 cents that exists outside of museum collections. This specimen was previously part of the Dominion Collection and sold on August 15 at the ANA World's Fair of Money in Chicago from the George Hans Cook Collection.

Early in 1936 Edward became king, succeeding his late father, George V. As was the usual practice, the coinage for the remainder of the year continued to bear the effigy of the deceased monarch, but by early December plans for the new Canadian coinage for Edward VIII were at an advanced stage. Edward's abdication, constitutional crisis and the shortage of coins early in 1937 forced Canadian authorities to continue producing coins dated 1936 and bearing the portrait of George V. In order to make these coins distinguishable from those actually produced in 1936, a tiny dot was placed on each of the reverse dies.

Only 80,000 Newfoundland 50 cents 1874 were minted and there are practically not known in Mint State condition. This example is definitely the best one in private hands and it was surfaced in Britain in the 1990s. Heritage Auctions, the firm that sold it in January mentionned that A Fremantle Proof is in the British Museum.

Also called the King of Canadian Coins, fewer than 200 50 cents 1921 are believed to exist. About 200,000 of 1921 50-cents were produced, but since the demand for the new coins was very low, most of them remained in storage in the Mint. By 1929, when the demand for the fifty-cent coins improved and because the Mint feared that the public might question the authenticity of new-looking coins bearing old dates, the Deputy Master of the Mint ordered that the stock should be melted and that a portion of the melted silver should be used for producing new 50 cents dated 1929. It appears that most of the 1921 pieces were among those melted.

Because the Ottawa Mint was a branch of the Royal Mint in 1908, it was part of the duty to produce Gold Sovereign for London. The mintmark C above the date stands for Canada. Only 636 Sovereign 1908-C were minted, all in Specimen finish. 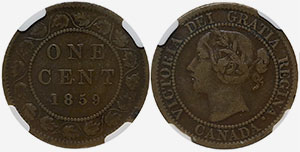 The Canadian Numismatic Company described this coin as:

A superb and attractive circulated example with nice yellow colour. Totally problem free. A superior example and rarely offered in our auctions. This coin presents an important opportunity for Registry Set collectors.

In 1921, a legislation was passed to remove silver 5-cent coins and replace them with 21 mm (instead 15.5 mm) 100% nickel ones. At that time, the Mint melted more than 3 million of silver five cents coins which most of them were from 1921. Only 400 silver 5-cents coins are believed to have survived and PCGS has graded only 4 specimen examples with 8 to 10 known.

Previous sales of this exact coin:

This rare 25 cents 1969 mint error was struck over a German States, Prussia gold 20 Marks dated 1906-A. Heritage Auctions described it as:

Much of the detail of the original piece remains, and the coin itself has survived in fully gem condition, its flashy pale-gold surfaces shining with gentle wateriness. Comparable to an example of the same date, this struck over a Great Britain gold Sovereign dated 1967, that we offered in 2014 and which sold for $18,000 USD hammer. Possibly unique with the present undertype, and a trophy piece for the collector of Canadian mint errors.

A lot of Mint State high grade ones sold at the Marlborough Collection of George V Quarters sale by Heritage Auctions. This 25 cents 1915 is among four other examples certified to date in total by PCGS and NGC. ICCS does not provide population figures.

Previous sales of this exact coin:

Pictures by Heritage Auctions, PCGS and The Canadian Numismatic Company.